Seattle Ranks No. 6 for Investment in High-Density Housing Nationwide

In a city as crowded as Seattle, it’s no wonder that builders and developers have been investing in high-density housing projects for years. High-density housing — specifically apartments, condos, townhomes and any building containing more than five housing units — has long seemed the best way to accommodate Seattle’s growing population in the wake of the tech boom that has drawn more workers into the area.

While the pandemic has certainly impacted the rate at which people are moving into these units, Seattle is not alone in the nation when it comes to this kind of up-front investment in high-density housing. A recent study from Porch.com took into account the percentage of building permits across the country that were issued specifically for housing structures with more than five units in 2019.

It found that the most high-density investment came from states on the west coast, and extremely populous areas in the northeast. Seattle came in at number 6 nationally, with larger urban centers including New York and San Francisco beating out the Emerald City.

For Seattle, the study revealed that 61% of new units were intended for high-density structures, with 29% of the city’s current housing units existing in high-density buildings. In total, Seattle added 16,426 new high-density units to the city in 2019, out of a grand total of 26,599 new housing units in general.

New York ranked no. 1 in the nation, with 76% of its building permits in 2019 going toward high-density housing units. Coming in second was San Francisco, with 68% of its new housing designated as high-density. Close behind were Boston, Los Angeles and Miami, ranked at no. 3, 4 and 5, respectively.

Though some have argued that Seattle’s investment in high-density housing may be hurt in the short term by the impacts of Covid, so long as Seattle remains a hiring hub for companies like Google, Facebook, Microsoft and Amazon, it’s hard to believe that the city’s housing units will remain empty for long.

This article was originally posted on Seattle P-I by Becca Savransky, and getthewreport.com

The number of people who can work remotely may be changing the way we view our homes, but one trend has not changed. The local housing market in October remained unseasonably hot. And that doesn’t show signs of changing any time soon.

October saw continued low inventory and record-level sales, with the number of sales exceeding that of 2019 year-to-date.

While new listings are on the rise, they are being snapped up quickly and many homes are selling in a matter of days. In King County there were 38% fewer single-family homes on the market as compared to a year ago. Snohomish County had 59% fewer listings. A four-month supply of homes for sale is considered a balanced market, but King and Snohomish counties currently have less than one month of supply.

With supply unable to keep up with demand, home prices are escalating at double-digit rates. The median single-family home price in King County rose 14% over a year ago to $745,000. Prices in Snohomish County jumped 17% year-over-year to a record high of $579,972. About half the homes that closed in October sold for over the asking price as compared to about a quarter of the homes the same time last year.

The real estate market here is uncommonly resilient. Growing employment in major tech industries and an enviable quality of life have made our region one of the fastest growing areas in the country. With interest rates remaining at record lows, we may well skip the traditional slowing in the winter market altogether. 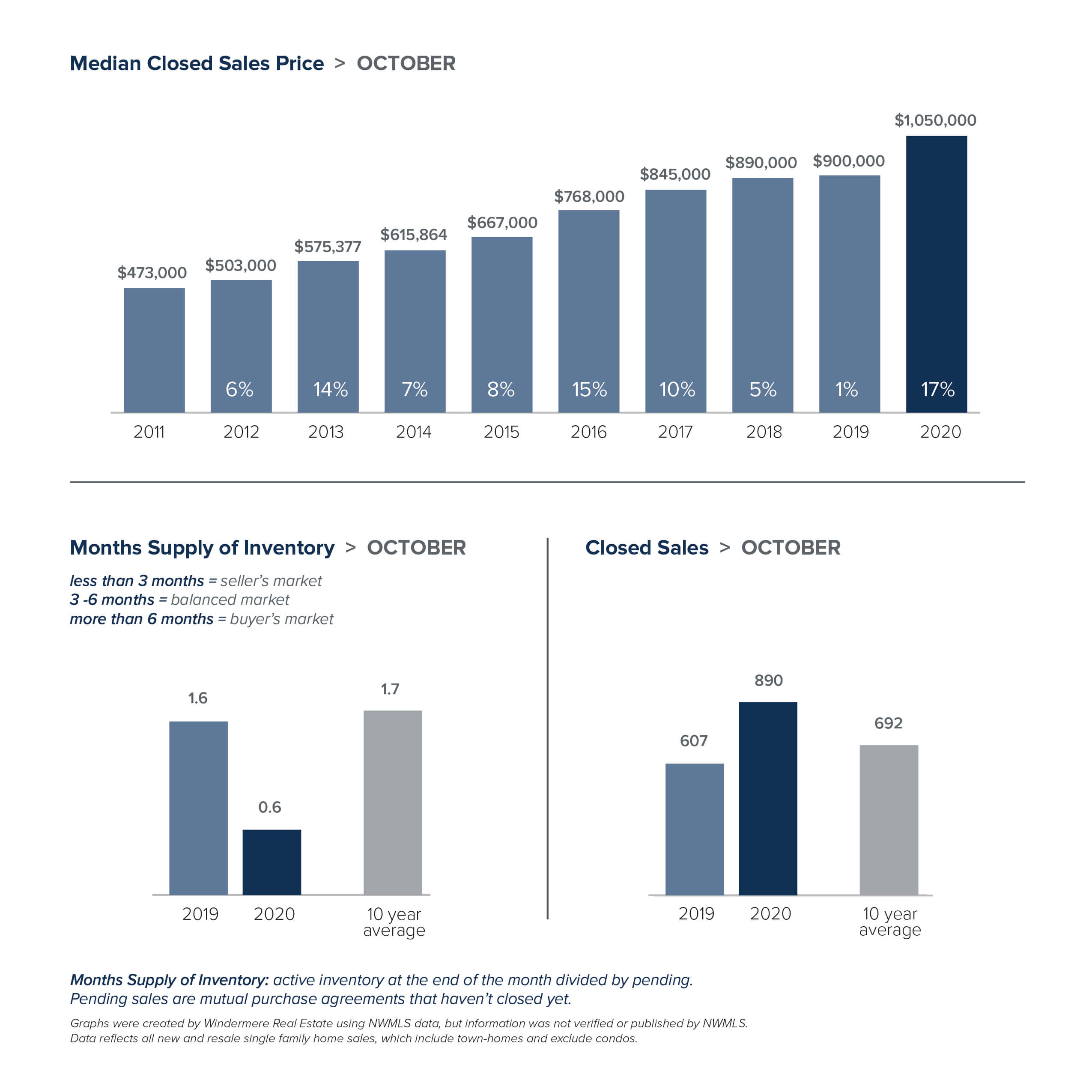 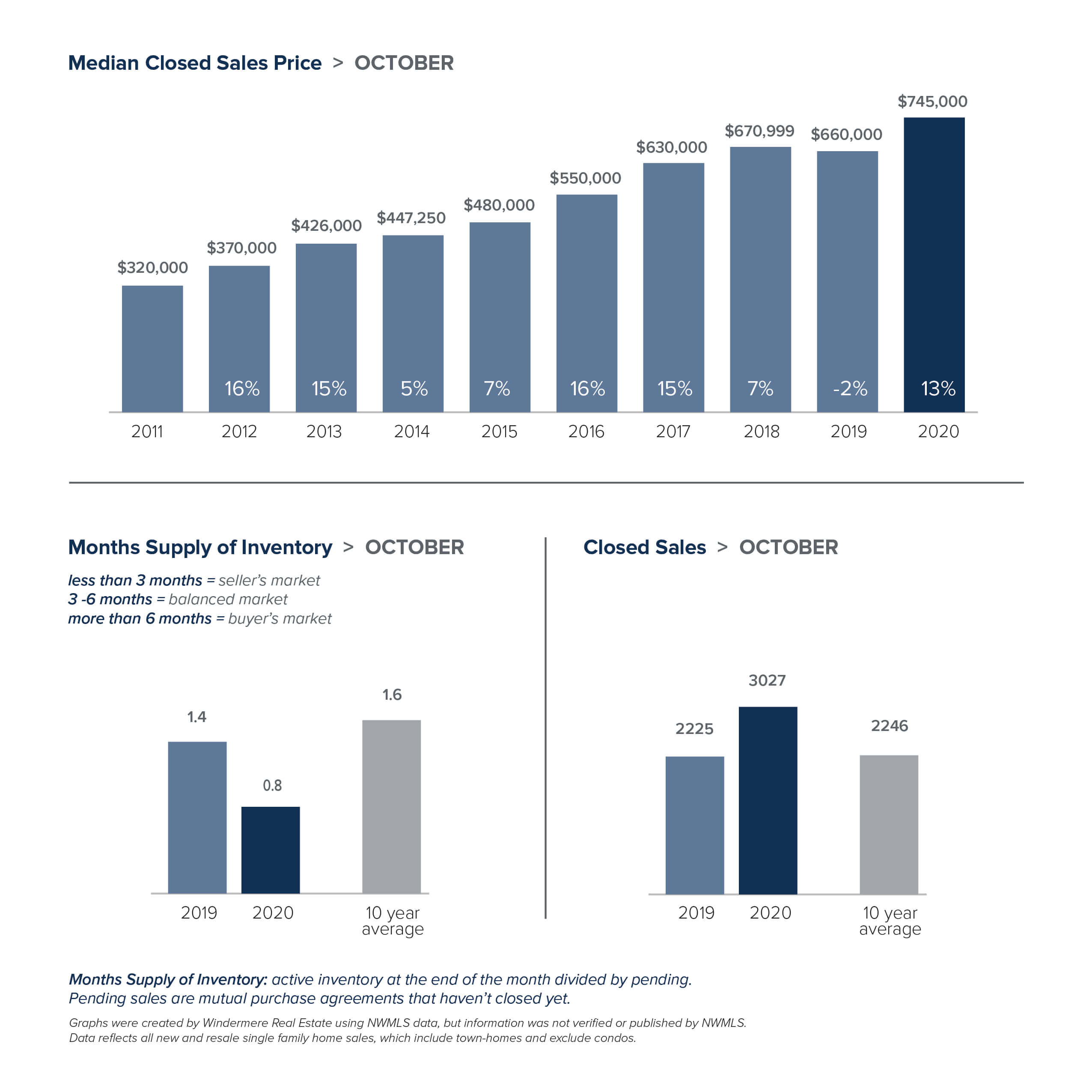 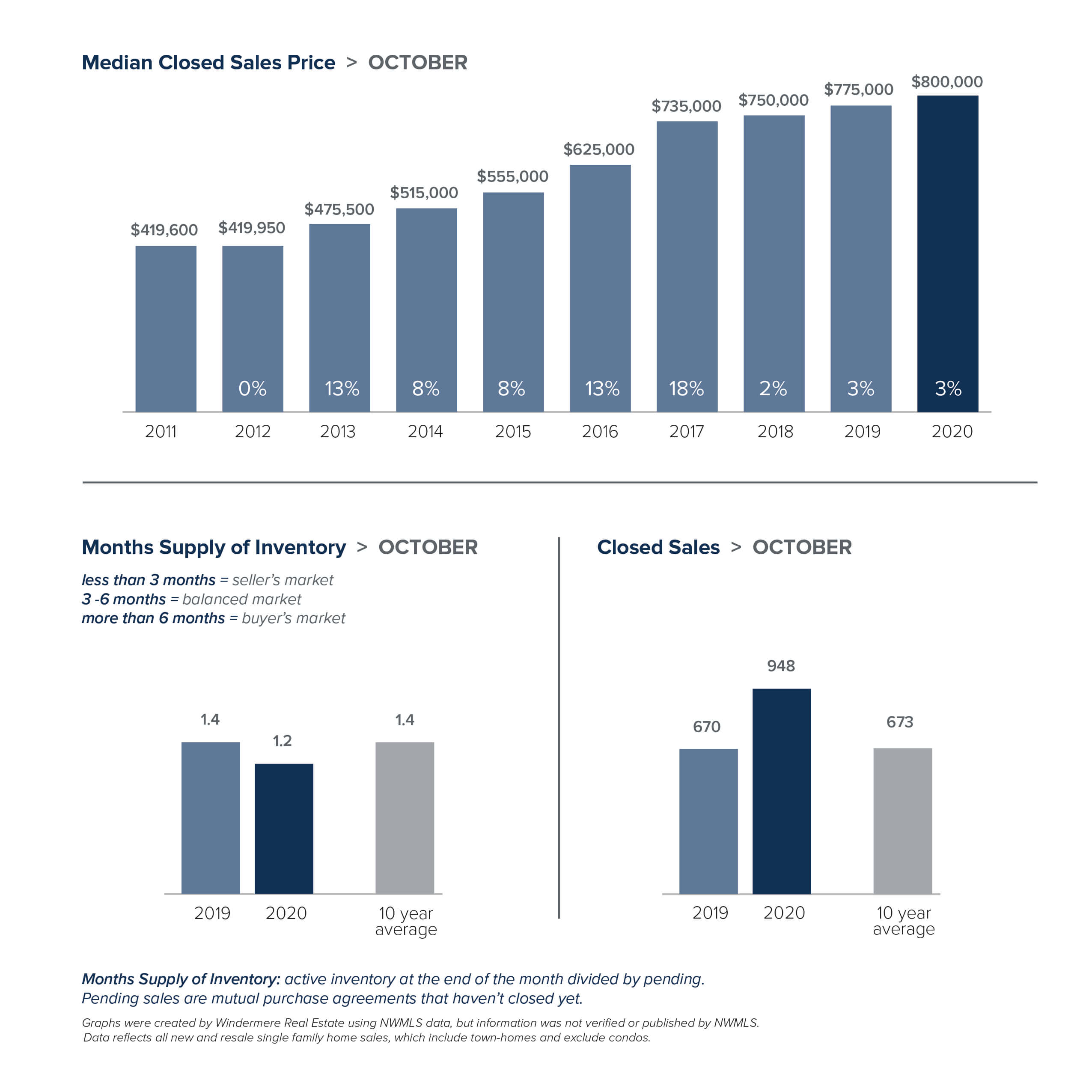 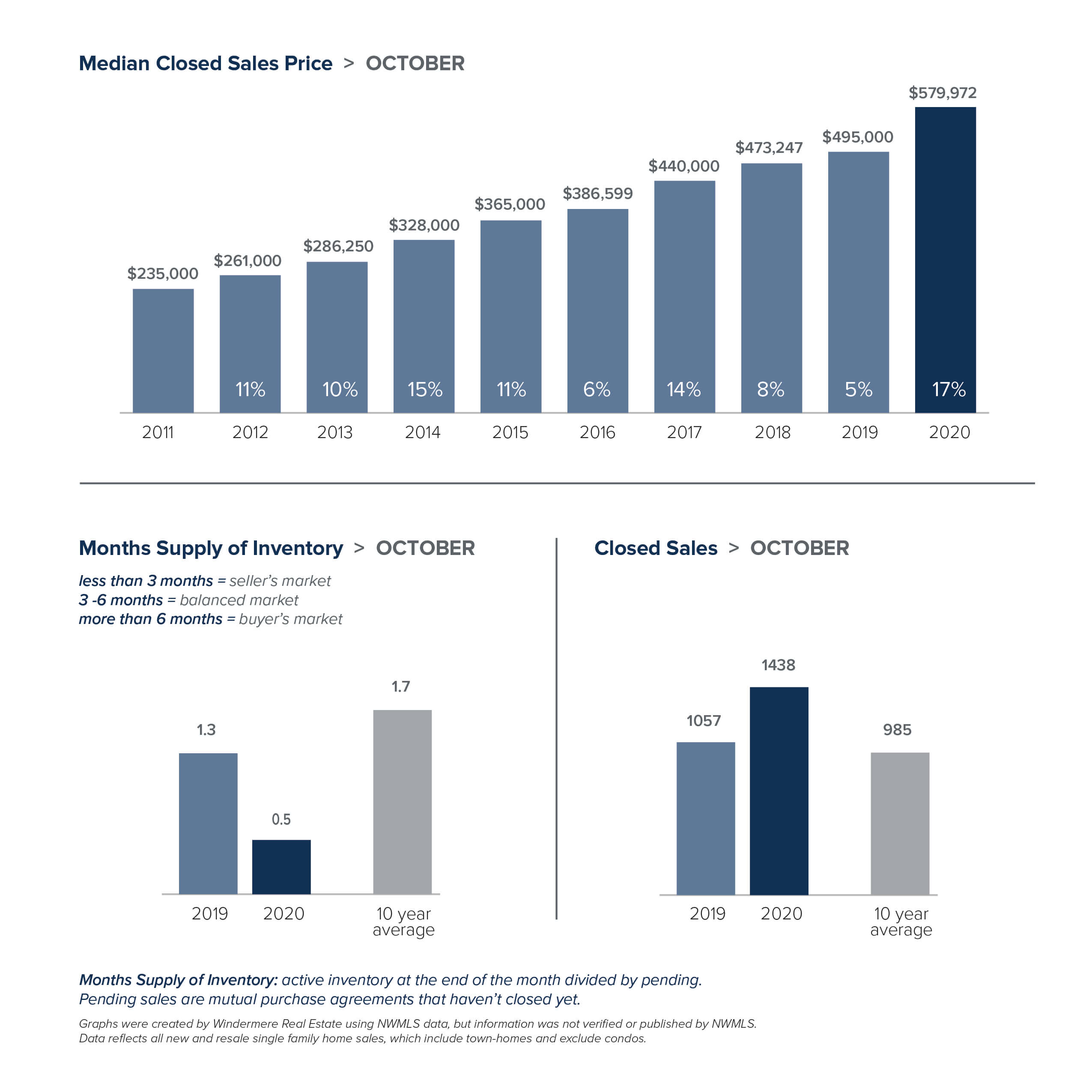 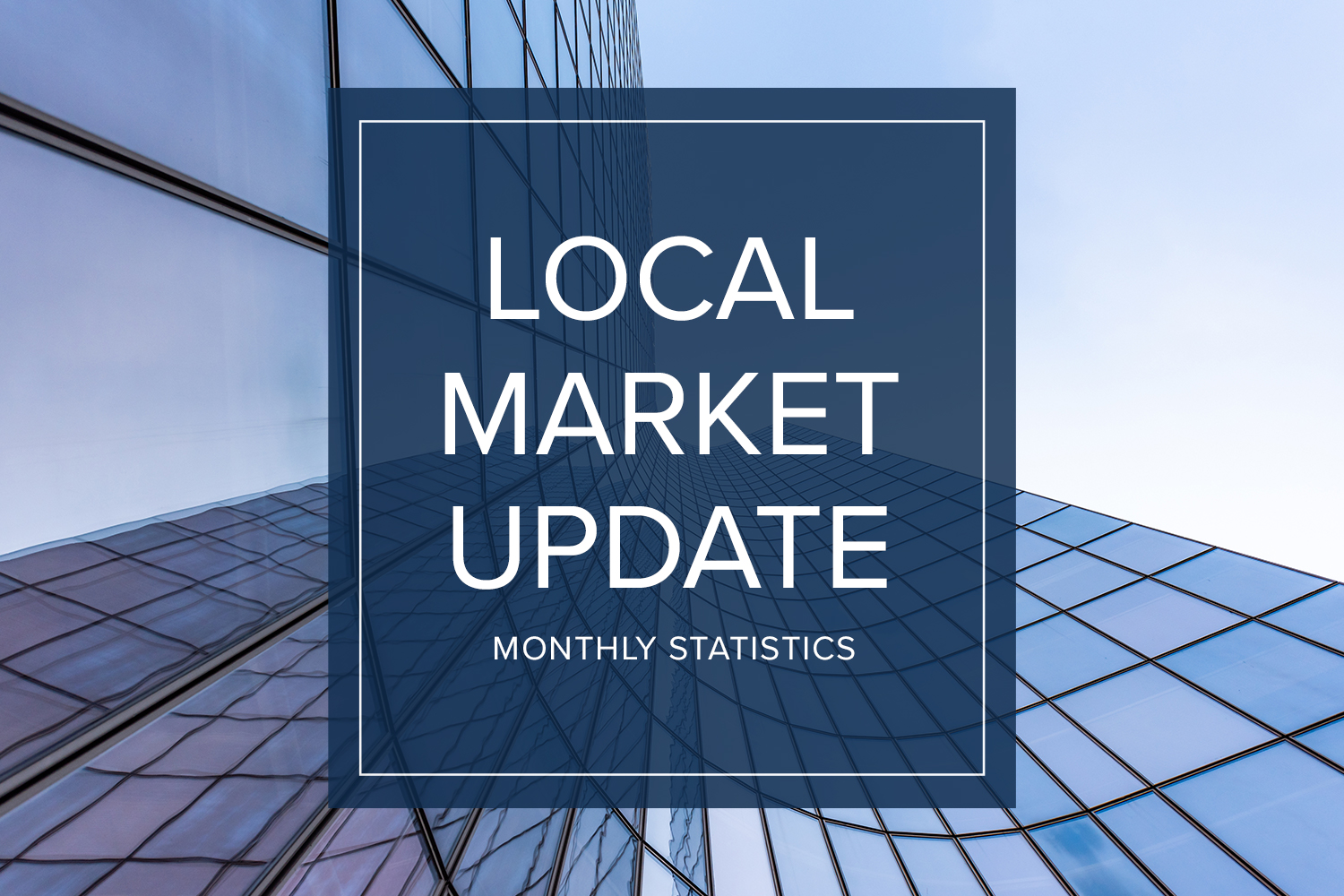 There just aren’t enough homes on the market to meet demand. King County had about half the inventory of a year ago. Snohomish County had 63% fewer available homes. On the other hand, the number of condos on the market in King County jumped by 24% over last September. Brokers attribute the flood of new inventory to COVID remote workers looking to trade their in-city condo for more living space. Despite the increase in inventory, condo prices rose 8% in September and pending sales — the best indicator of current demand — shot up 36% over the same period last year.

The slim supply of single-family homes means bidding wars and all-cash offers were the norm, driving prices to record highs. King County saw the third consecutive month of record-setting values. The median home price hit $753,600 in September, a 14% jump over last year. Prices in Snohomish County soared 16% from a year ago to $569,997, just shy of its all-time high of $575,000. For both counties, half the homes sold for over list price in September as compared with just a quarter of the homes a year ago.

The market doesn’t show signs of cooling off any time soon. In September the greater Northwest area saw the highest number of transactions since June 2018. Pending sales were up 32% in King County and 29% in Snohomish County. Interest rates continue to be at historic lows. With the area posting some of the fastest population growth in the country, expect the market to stay unseasonably hot. 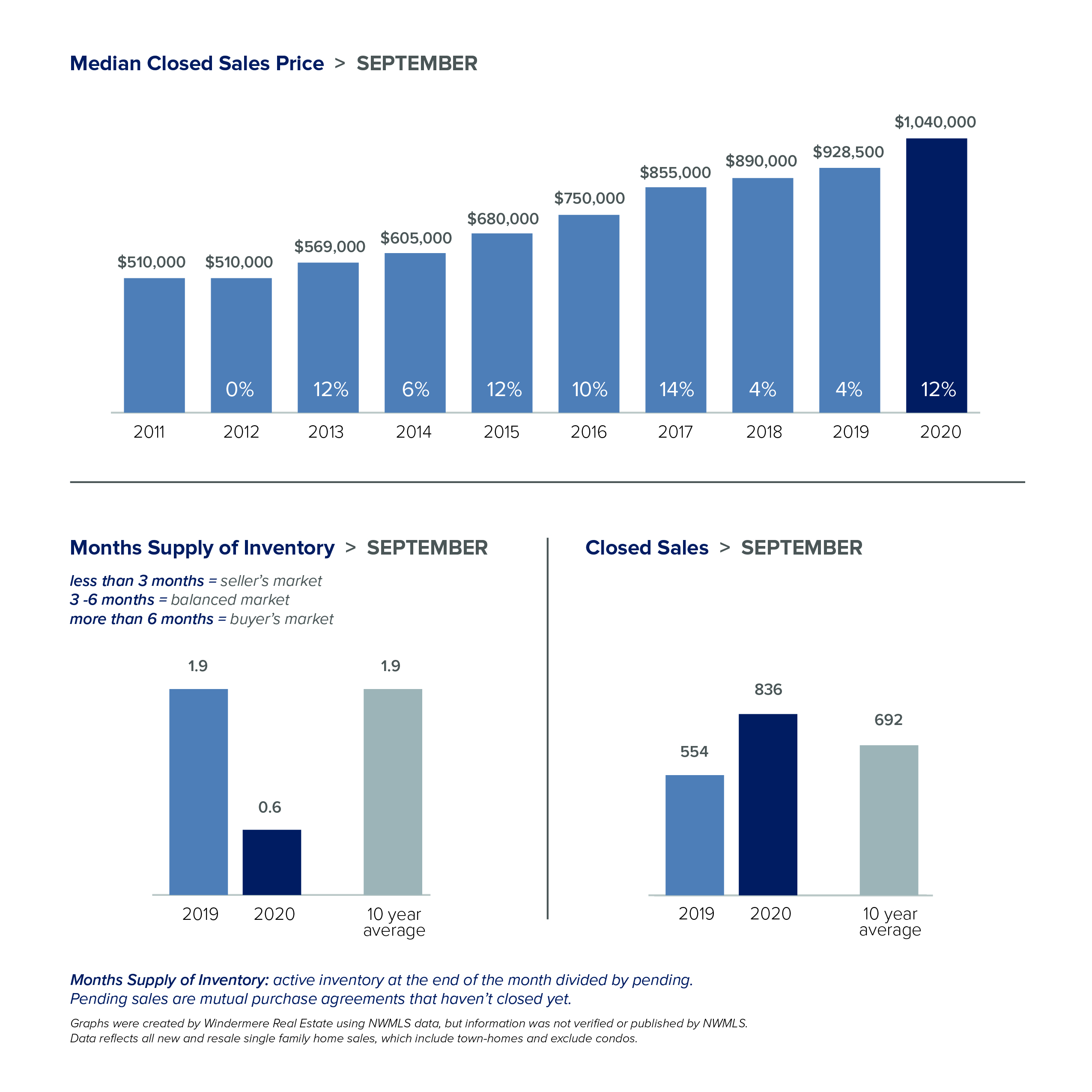 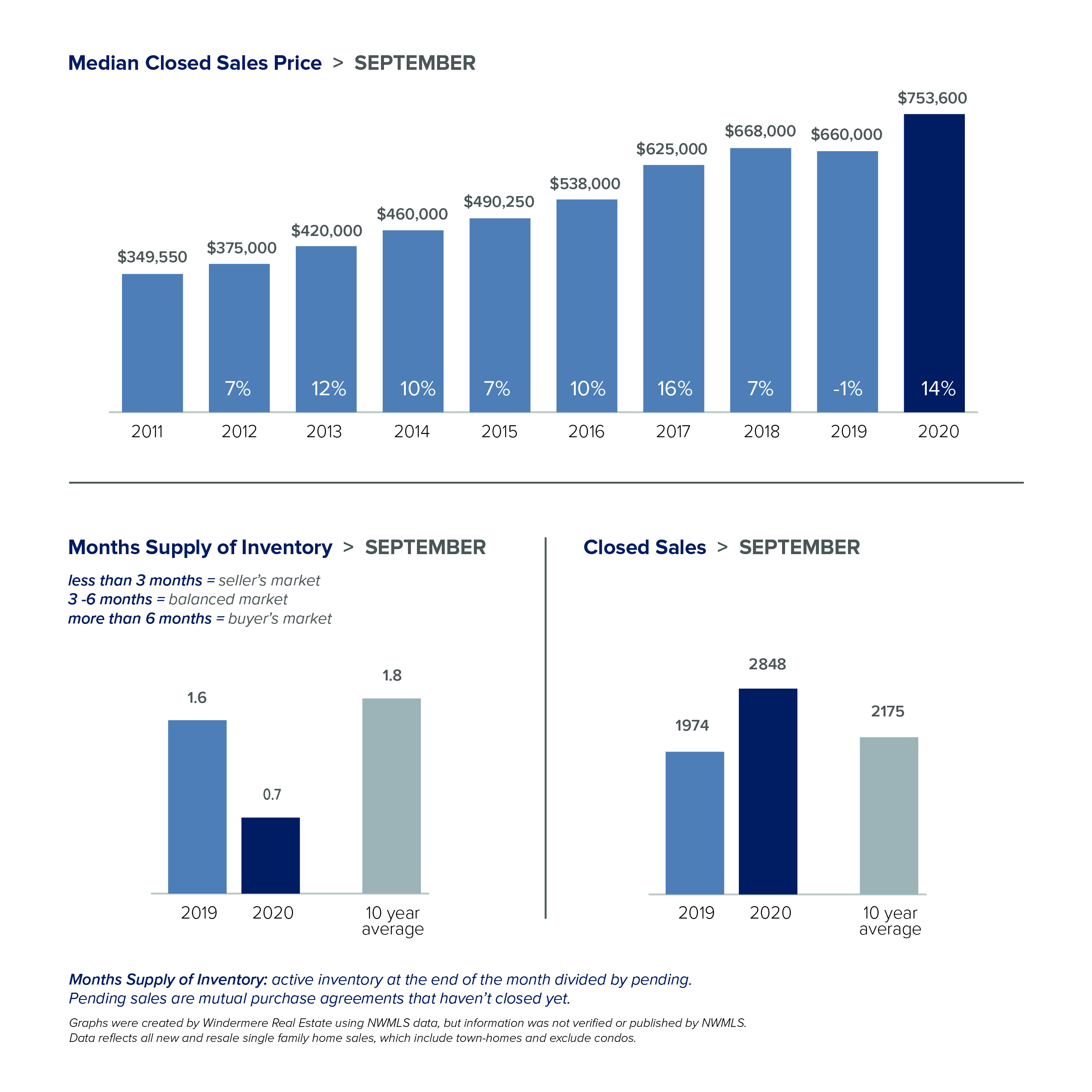 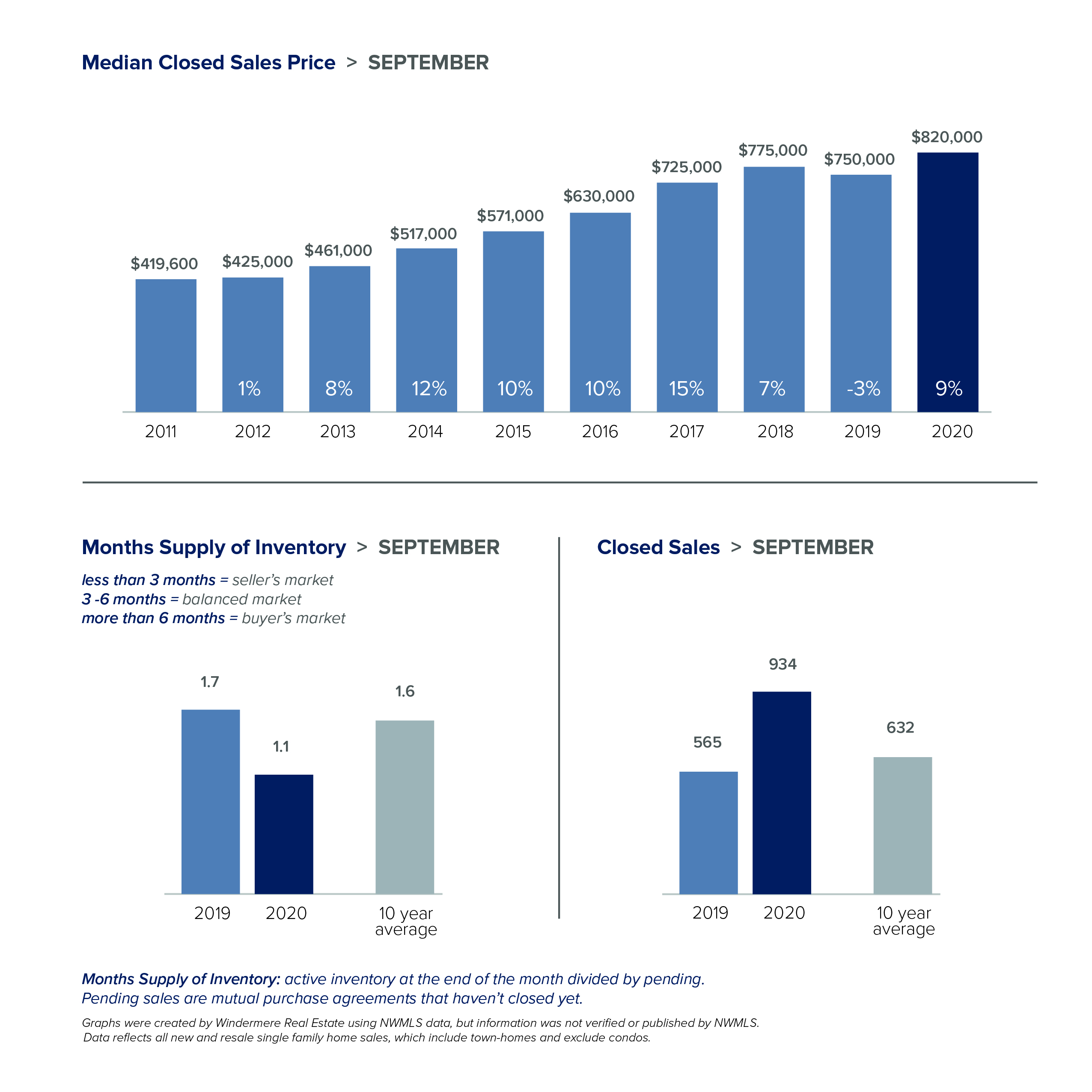 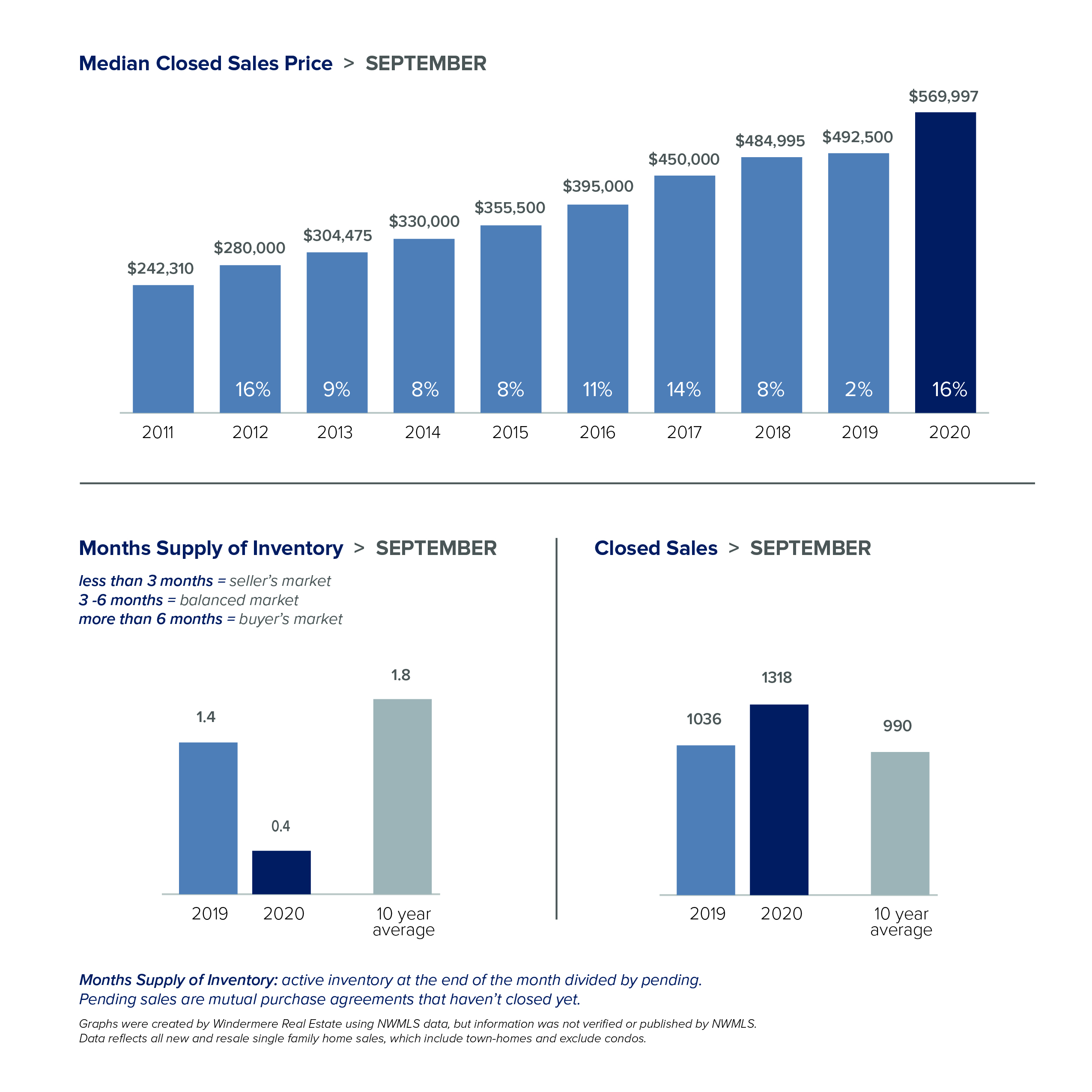 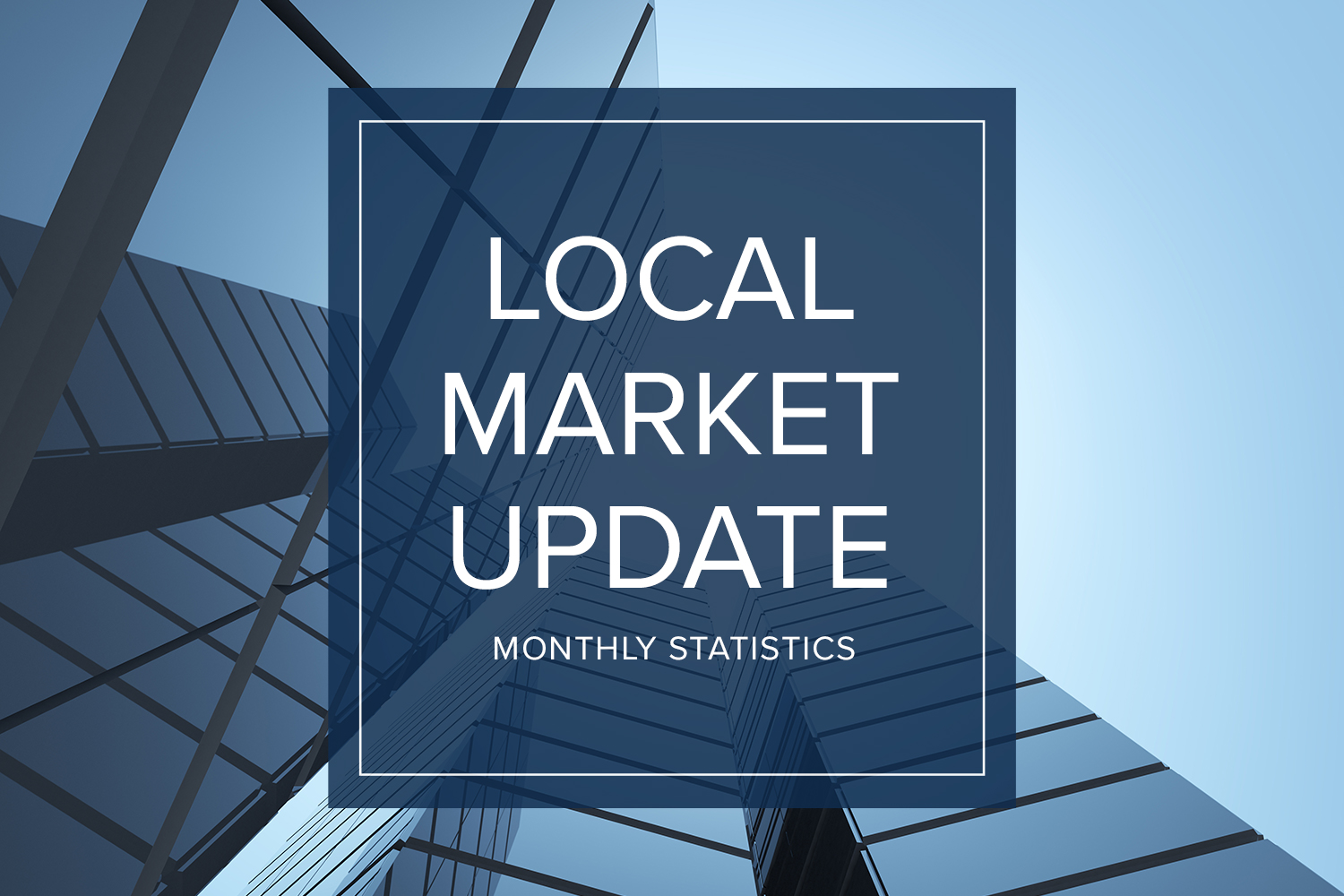 August saw the lowest number of homes for sale in more than 20 years and the lowest mortgage rates on record. Sparse inventory and high demand pushed home prices to new highs. 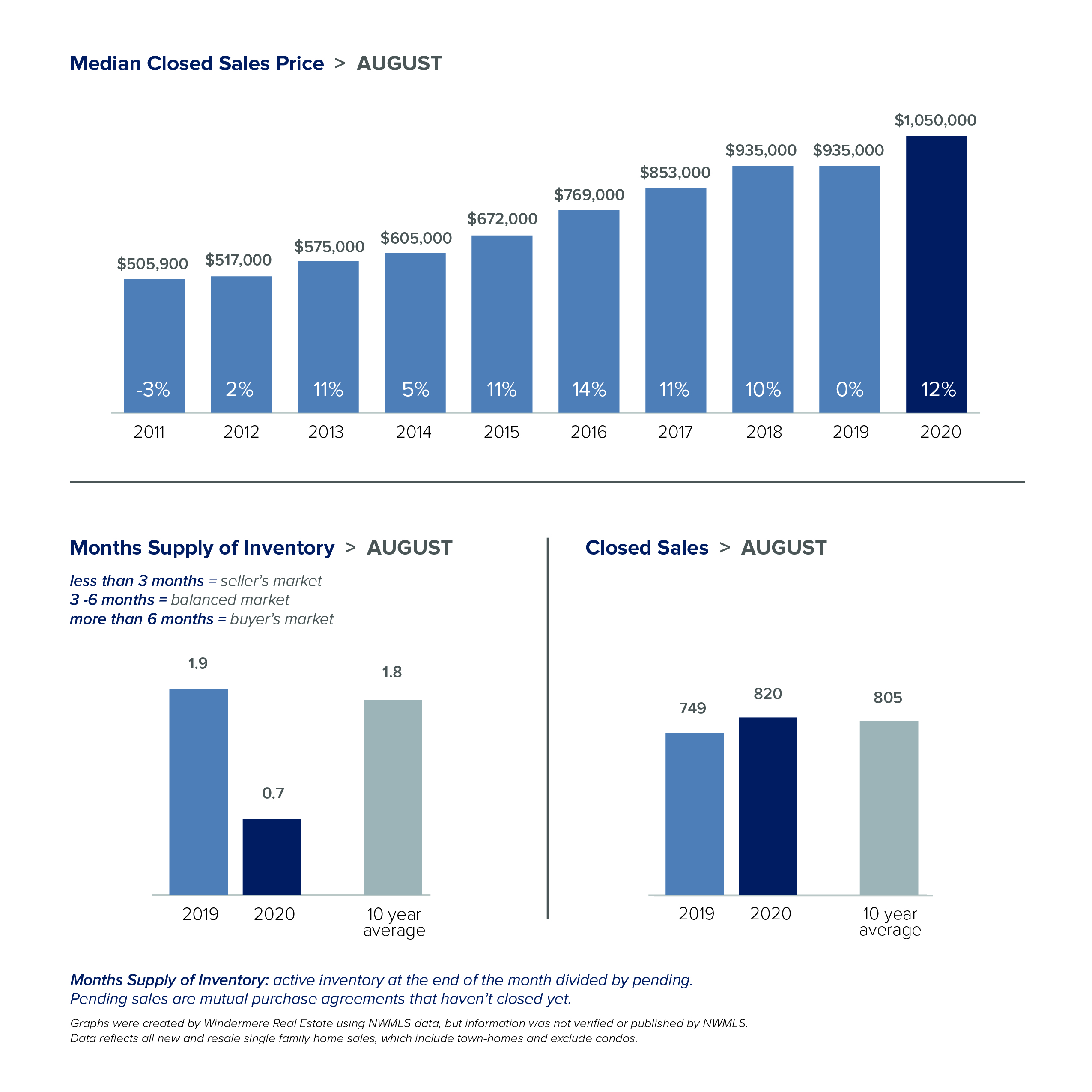 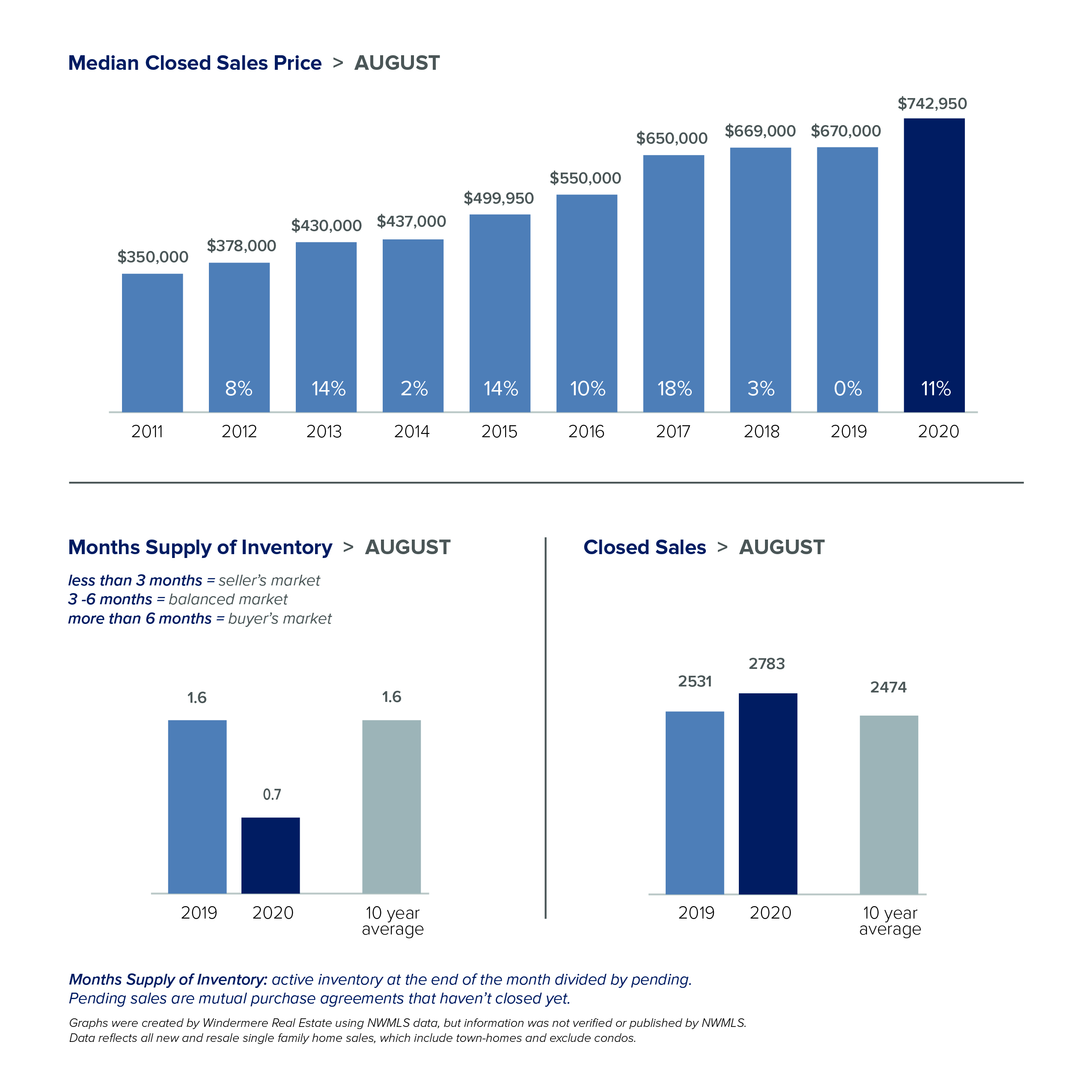 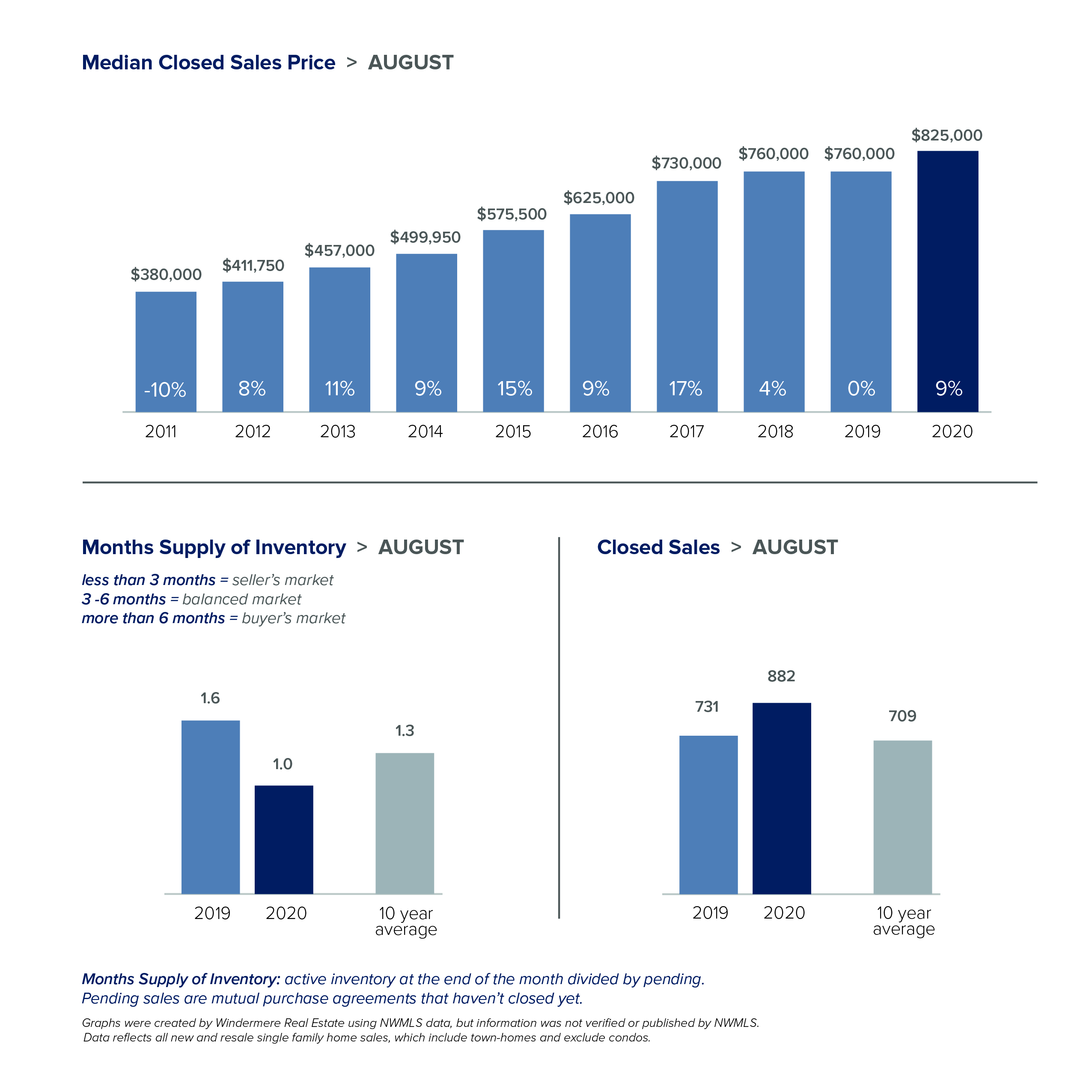 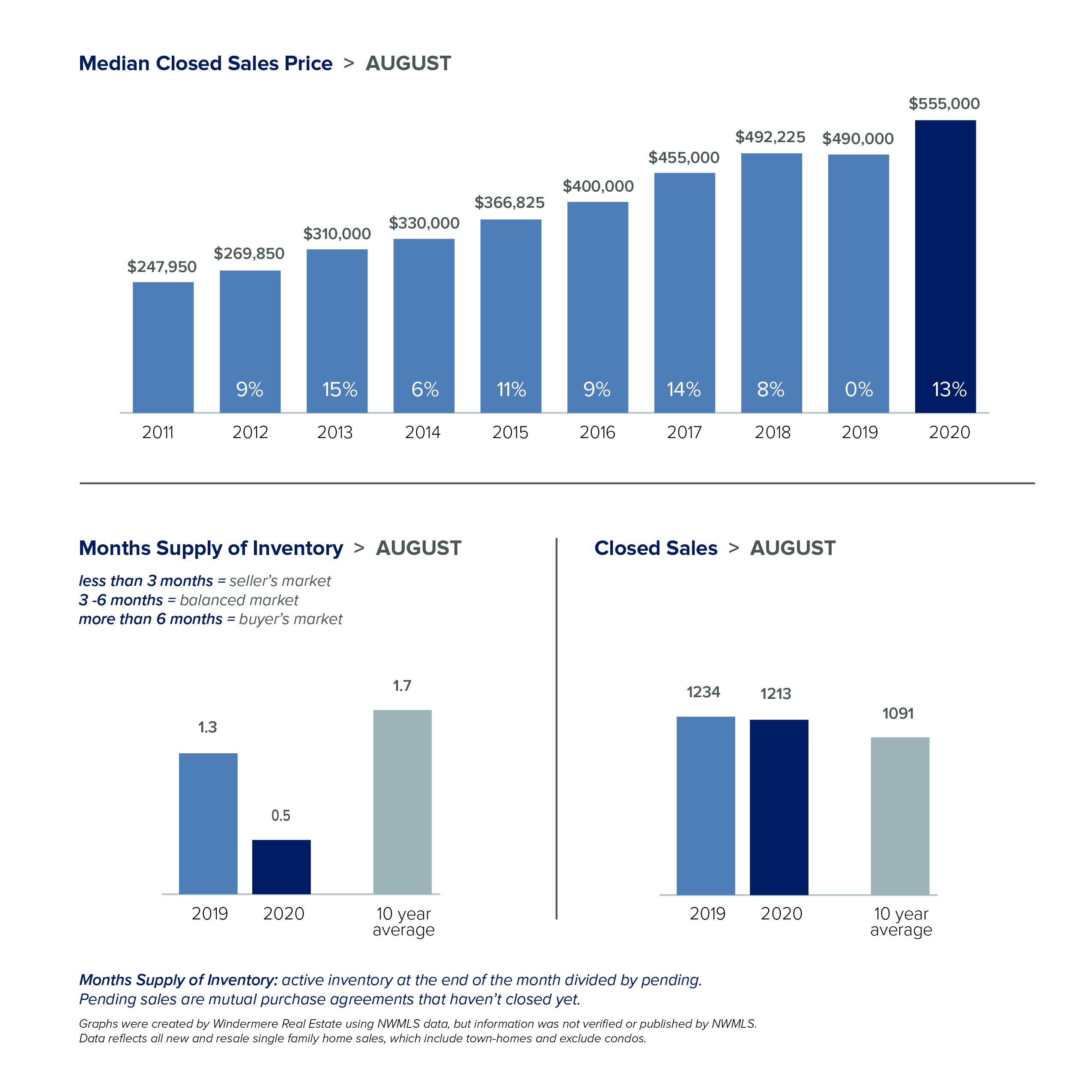 While the pace of daily life may seem slow right now, the
local real estate market has had an unusually busy summer. The number of
new listings in July was up, sales increased, and home prices followed
suit.

• While overall inventory is at historic lows, more sellers put their homes on
the market. New listings of single-family homes in King County jumped more than
25% from a year ago. Snohomish County saw a 7% increase in new listings.

• Pent-up buyer demand fueled sales activity in July. The number of pending
sales was up 17% over a year ago in King County, and up 13% in Snohomish
County.

• With buyers snapping up new listings as soon as they hit the market, total
available inventory dropped to a 10-year low for the month.

• The lack of inventory is benefiting sellers, and multiple offers are now common
at every price point. As a result, single-family home prices rose 7% in King
County and 15% in Snohomish County.

The following analysis of the Western Washington real estate market is provided by Windermere Real Estate Chief Economist Matthew Gardner. We hope that this information may assist you with making better-informed real estate decisions. For further information about the housing market in your area, please don’t hesitate to contact your Windermere agent.

It appears as if the massive COVID-19 induced contraction in employment that Washington State — along with the rest of the nation — experienced this spring is behind us (at least for now). Statewide employment started to drop in March, but April was the real shock: total employment dropped almost 460,000 between March and April, a decline of 13.1%. However, this turned around remarkably quickly, with a solid increase of 52,500 jobs in May. Worthy of note is that, in May alone, Western Washington recovered 43,500 of the 320,000 jobs that were lost in the region the prior month. Although it is certainly too early to categorically state that we are out of the woods, the direction is positive and, assuming we respect the state’s mandates regarding social distancing and mask wearing, I remain hopeful that Washington will not have to re-enter any form of lockdown.

What a difference a quarter makes! Given that demand has reappeared remarkably quickly and interest rates remain historically low, it certainly remains a seller’s market and I don’t expect this to change in the foreseeable future.

The overall housing market has exhibited remarkable resilience and housing demand has rebounded faster than most would have expected. I anticipate demand to remain robust, but this will cause affordability issues to remain as long as the new construction housing market remains muted.

As Chief Economist for Windermere Real Estate, Matthew Gardner is responsible for analyzing and interpreting economic data and its impact on the real estate market on both a local and national level. Matthew has over 30 years of professional experience both in the U.S. and U.K.